“Roswell Park makes a powerful difference in the fight against cancer and the determination to find a cure. We are honored to support such a wonderful resource and are blessed and fortunate to have Roswell right in our own backyard. Roswell is truly a very special gift to our community.” — Robert Harms, President/CEO, Western Division Federal Credit Union

When Rachael’s dad, Bill, was diagnosed with esophageal cancer, the family knew Roswell Park was the best place for him to be treated. And because Rachael works for Western Division Federal Credit Union as operations manager, she knew she would have the support to be with him when he needed her.

“At Western Division, we like to give back to the community as much as we can,” she says. “Not only do they give back financially, but during that time for me personally, they were wonderful to me. They accommodated my time off, and they do that for anybody.”

She says it was a relief during a very difficult time. But between the support of her employer and the care her father — and they as a family — received at Roswell Park, they came through it, and her father is doing well today.

Bill was in the ICU for several weeks after his first surgery. Rachael was touched by the depth of concern from staff, ranging from the aide who shaved off his scruffy beard to nurses who gently encouraged him to walk and to his surgeons. “That spoke volumes to us. It didn’t matter who you ran into, janitors, nurses, doctors, surgeons; the staff was absolutely incredible. Even the cafeteria staff — they get to know you every day. Just incredible people.”

When the Western Division team learned about the Herd of Hope and their CEO asked if they wanted to sponsor a blue buffalo, the answer was a resounding YES. “Absolutely, it was a no-brainer. We have it right out front of our entrance for our members, so everyone can see it. I think it’s great for the community, and when I’m driving to different places and I see it in front of other businesses, I know exactly what it says, which is kind of cool.”

Is your company interested in joining Herd of Hope? Find out more here. 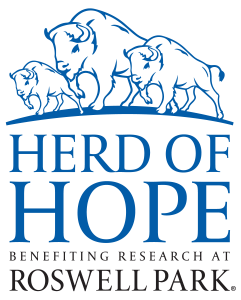